In our series Streaming Guide, we list the works of a filmmaker or actor which are available on streaming platforms like ZEE5, Netflix, Amazon Prime Video, Disney Plus Hotstar, Eros Now and YouTube among others.

This edition features Bollywood actor Kajol who has films like Dilwale Dulhania Le Jayenge, Kuch Kuch Hota Hai, Dushman, Fanaa and Tribhanga among others to her credit. 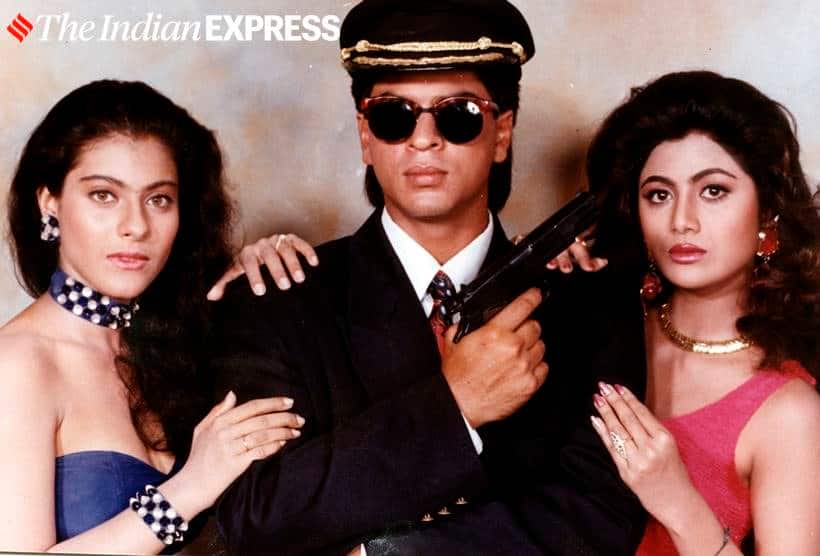 The Abbas-Mustan crime thriller stars Shah Rukh Khan, Kajol, Dalip Tahil, Rakhee Gulzar, Shilpa Shetty Kundra, Siddharth, Johnny Lever, Ananth Narayan Mahadevan and Daboo Malik among others. It revolves around a young man who has a vendetta against a business tycoon and plots to destroy his family. Baazigar is among the early successes of Kajol’s career. 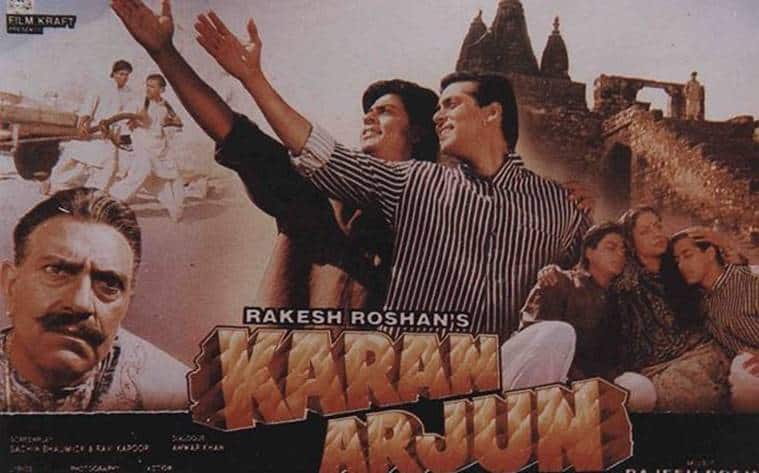 The Rakesh Roshan-directed reincarnation drama stars Salman Khan and Shah Rukh Khan in the lead roles along with Rakhee, Mamta Kulkarni, Kajol, Amrish Puri, Ranjeet, and Johnny Lever in supporting roles. Salman and Shah Rukh play brothers who are killed by their scheming uncle (Amrish), only to be reborn to take revenge from their family’s enemy. After 25 years of its release, the film is still remembered for its dialogues and the chemistry between the lead stars. 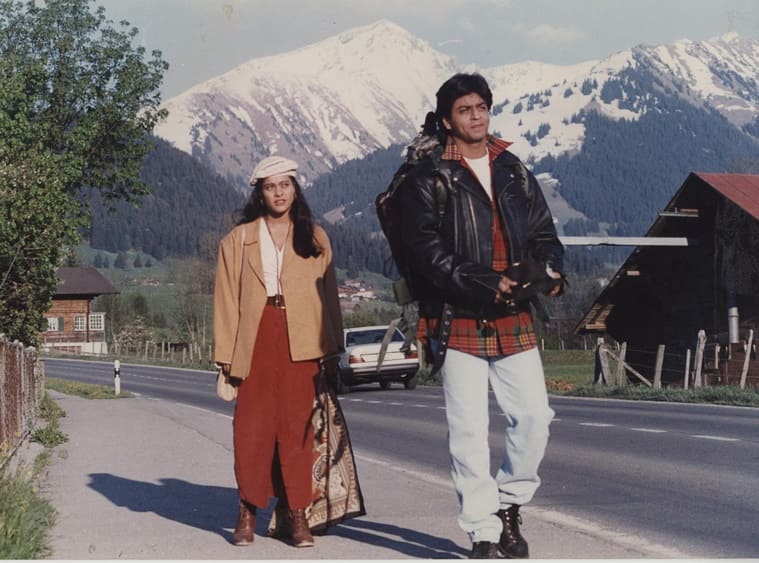 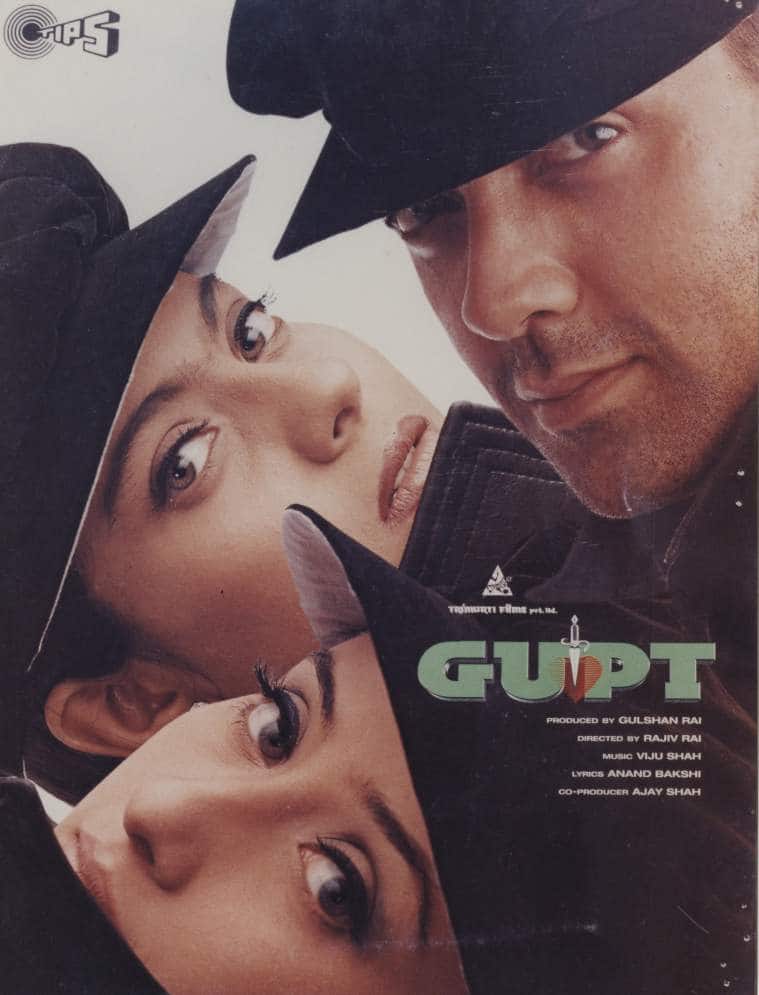 The suspense thriller features Kajol in a negative role. She plays an obsessive lover in the Rajiv Rai directorial, also starring Bobby Deol and Manisha Koirala in the lead roles. The film begins with Sahil’s (Deol) stepfather Jaisingh Sinha (Raj Babbar) announcing his marriage with Sheetal (Koirala), leaving Sahil’s childhood sweetheart Isha (Kajol) angry. Next evening Jaisingh gets murdered, and Sahil is accused of killing him. Now, is Sahil the murderer or there is someone else behind the crime, forms the narrative of the film. 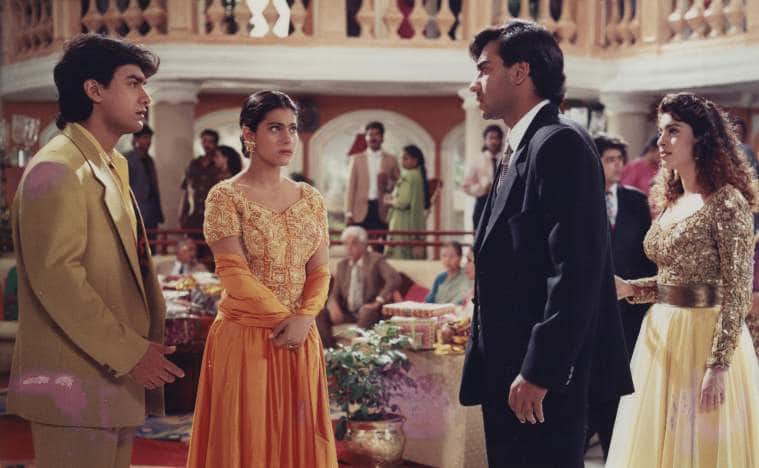 Ishq, starring Ajay Devgn, Kajol, Aamir Khan and Juhi Chawla, is a typical Bollywood movie of the 90s. It boasts of brilliant music by Anu Malik (Humko Tumse Pyaar Hai, Mr Lova Lova, Neend Churayi Meri), a hilarious first half and a melodramatic second half. The scene where Aamir tries to walk on a pipe between two high-rise buildings will always be the high point of the movie for me. 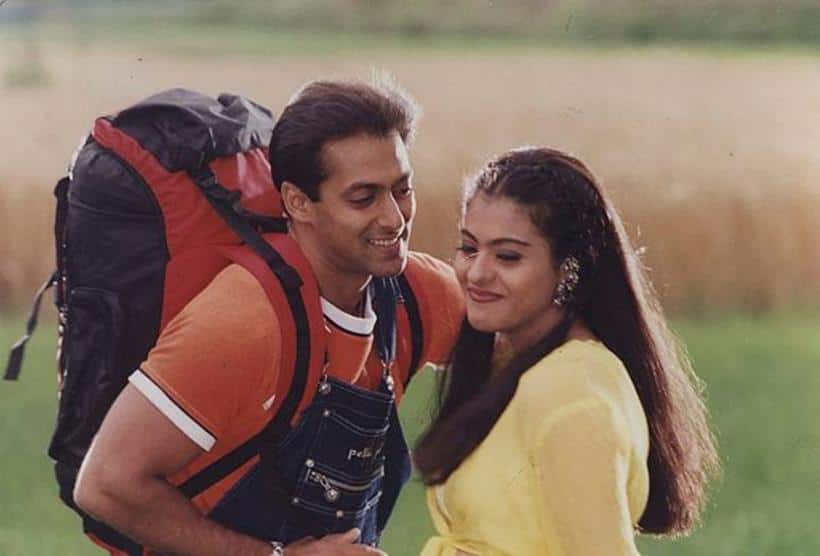 A still from Pyaar Kiya To Darna Kya.

Written and directed by Sohail Khan, Pyaar Kiya To Darna Kya stars his brothers, Salman and Arbaaz, along with Kajol and Dharmendra in pivotal roles. More than anything, the film is remembered for its song “O Jaane Jana”, Salman’s chiselled physique and Kajol’s jovial aura. 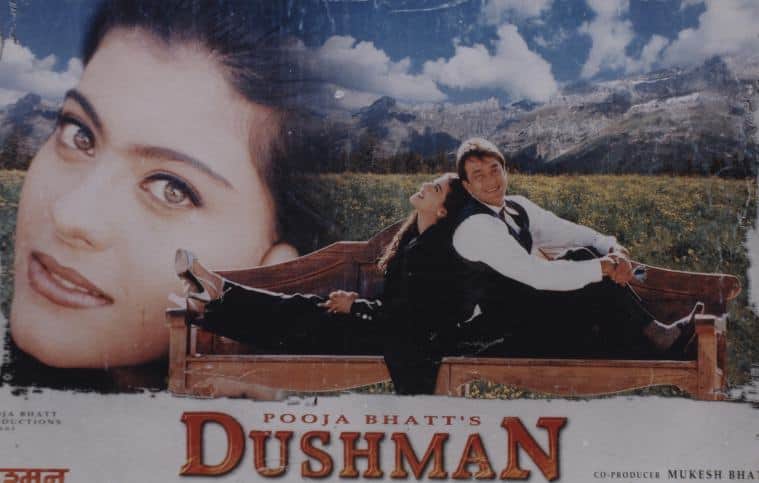 Starring Kajol in a double role and Sanjay Dutt as a visually-impaired military veteran, 1998 film Dushman is a psychological thriller directed by Tanuja Chandra. The film also features Ashutosh Rana as a psychopath who sexually assaults and kills women.

Kajol shares screen space with husband Ajay Devgn in Pyaar Toh Hona Hi. This feel-good family entertainer can be watched any time of the day. 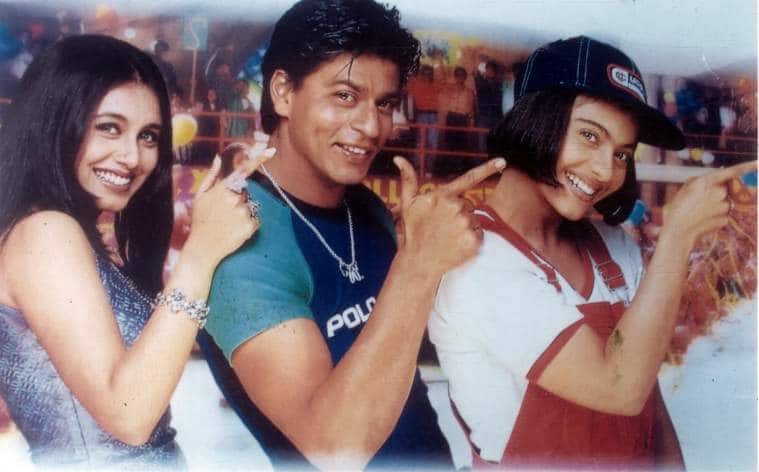 Karan Johar’s first directorial Kuch Kuch Hota Hai is among the favourites of 90s kids. Shah Rukh Khan, Kajol and Rani Mukerji play key roles in the film which enjoyed phenomenal success at the time of its release in 1998. The millennials fell in love with Shah Rukh, Kajol and Rani in the characters of Rahul, Anjali and Tina, respectively. From its friendship goals to fashion and even dialogues like “pyaar dosti hai” and “kuch kuch hota hai Rahul, tum nahi samjhoge,” several things remain etched in our memory. 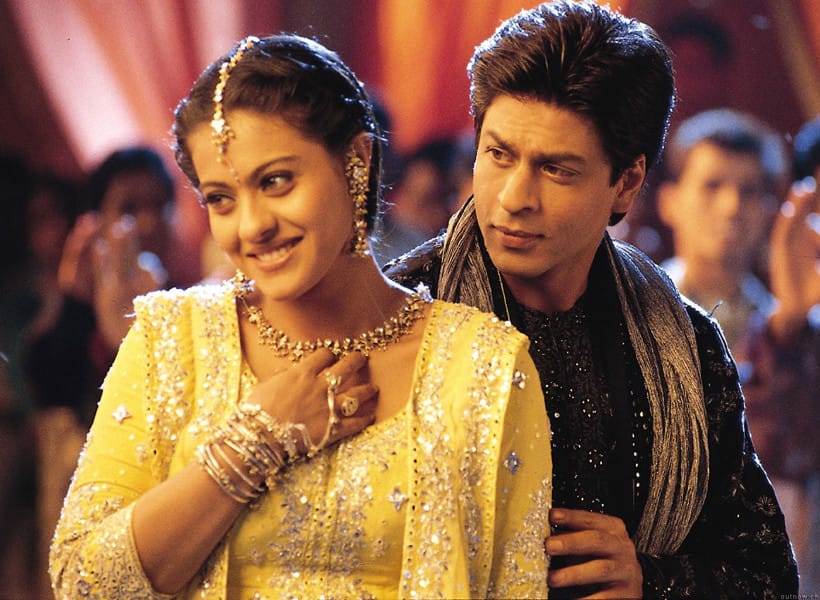 Kajol and Shah Rukh Khan in a still from Kabhi Khushi Kabhie Gham.

The family drama is a guilty pleasure for many fans of Bollywood. It features some memorable moments, including Rahul’s (Shah Rukh) entry and Jaya Bachchan sensing his footsteps, and the sequence where Kajol and SRK’s son Krrish gives a speech, “Zindagi mein kuch banna ho…”, taught to him by Hrithik Roshan.

Directed by Kunal Kohli, the romantic thriller features Kajol in the role of a visually impaired girl Zooni who falls in love with Aamir Khan’s tour guide Rehan Qadri. But soon it is revealed that he is a terrorist on the run. The film is a regular Bollywood romantic drama and has nothing extraordinary about it except the music by Jatin-Lalit with Salim-Sulaiman.

My Name Is Khan 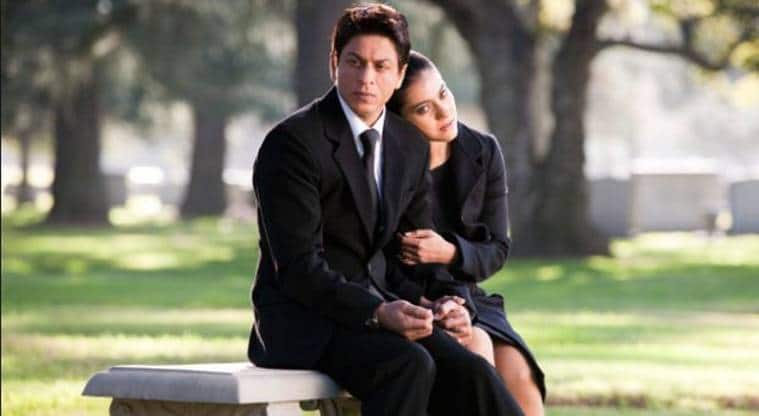 Shah Rukh Khan and Kajol in My Name is Khan.

The Karan Johar directorial is the story of innocent Rizwan Khan (Shah Rukh Khan) whose family falls apart post 9/11 attack. He embarks on a journey to meet the US president to tell him that not all Muslims are terrorists. Kajol essays the role of Shah Rukh’s wife in the movie. 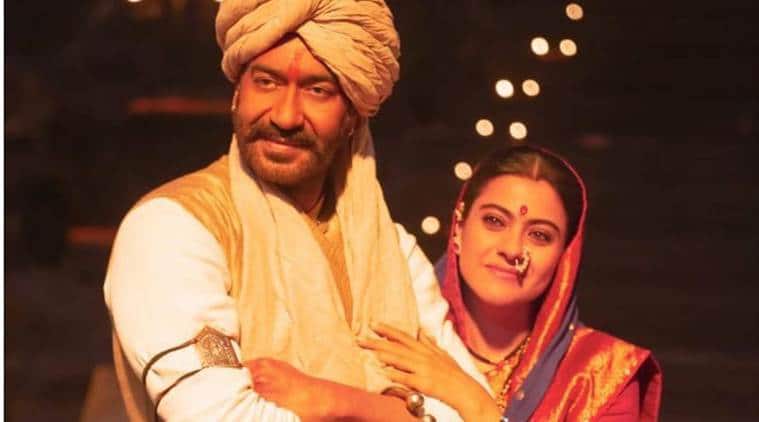 The Om Raut directorial is the story of the military leader of the Maratha empire, Tanhaji Malusare (Ajay Devgn) who led the battle against the Mughal commander Uday Bhan. While Saif Ali Khan plays Uday, Kajol essays the character of Savitribai Malusare (wife of Tanhaji).

Short film Devi, starring Kajol, Shruti Haasan, Yashaswini Dayama, Neena Kulkarni and Neha Dhupia “is the story of nine oppressed women, from different strata of society, living in a small room, faced with the dilemma of sharing their space and stories in a country all too used to tragedy and pain.” 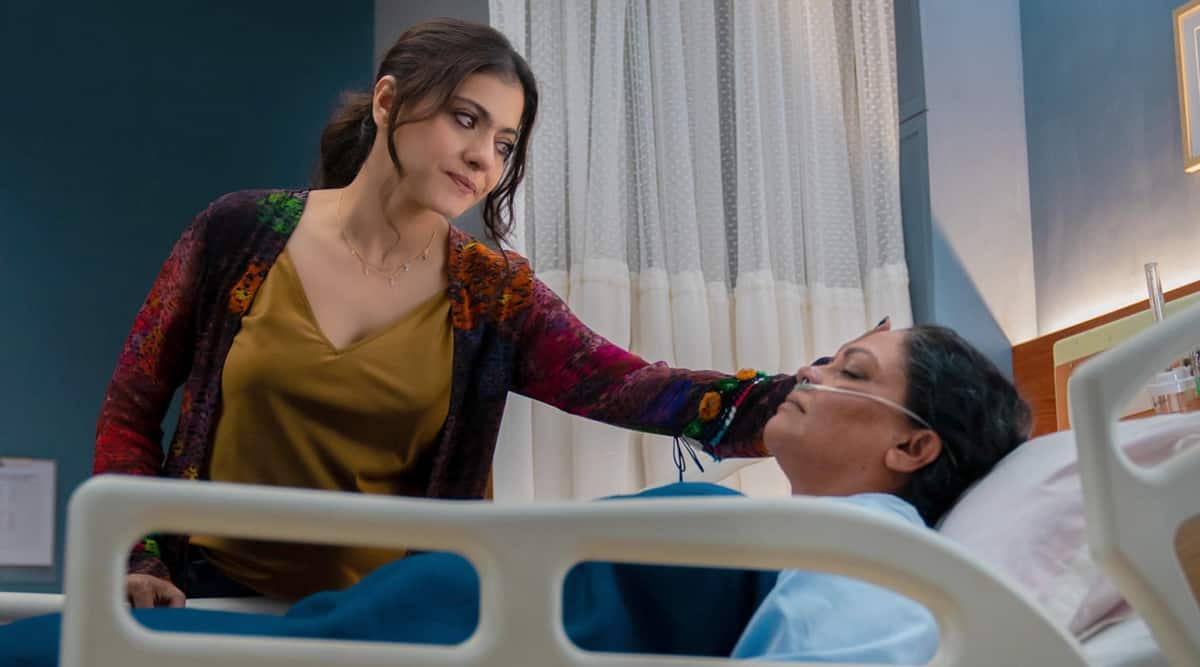 In her review of Tribhanga, The Indian Express film critic Shubhra Gupta wrote, “Renuka Shahane’s directorial debut Tribhanga is a chamber piece which manages to go past its problems to brim over with real feeling. What I really like about Tribhanga is the clear-eyed, unsentimental treatment of relationships, which can often be so cloyingly exaggerated in mainstream cinema.”