With its daily case count beginning to rise again, Delhi has regained the number one position amongst cities with the maximum number of coronavirus cases in the country.

On Thursday, Delhi recorded almost 3,500 new cases to take its total number of infected people so far 3.21 lakh. In the process, it overtook Pune, which had been carrying the maximum burden of infected people for the last one and half months. After reporting more than 5,000 cases a day on a few occasions in late August and early September, Pune has seen its daily numbers come down steadily in the last on month. For the last three days, it has been reporting less than 1,500 new cases a day.

Delhi, on the other hand, had slowed down considerably in June and July, then saw its numbers rise sharply once again in September, before entering another phase of decline. But its numbers have started going up again in the last three days, when, after a gap of almost two weeks, the daily new infections have been more than 3,000.

Meanwhile, Bengaluru has been growing at a very fast rate in the last two weeks. On three occasions during this period, the city reported more than 5,000 cases in a day. Delhi has never crossed even 4,500 mark. Bengaluru has been driving the rise of Karnataka which is the second fastest growing state in the country right now, after Kerala. On several occasions in the last three weeks, Karnataka has reported more than 10,000 cases a day.

With more than 2.97 lakh cases, Bengaluru is all set to hit the three-lakh figure on Friday. On Thursday, it reported almost 3,800 cases while a day before that more than 4,500 new cases were found in the city. At this rate, Bengaluru has the potential to even overtake Pune and Delhi in a couple of weeks. It has been steadily closing the gap with these two cities in the last couple of weeks.

Both Kerala and Karnataka are showing signs of a slowdown after three weeks of very rapid growth. Though the two states are still the largest contributor of cases in the country after Maharashtra, they are both off their peaks that was achieved a few days ago. Their growth rates have also declined significantly, though, again, they continue to be the fastest growing states right now.

Karnataka has so far recorded 7.44 lakh infections, while Kerala, with 3.18 lakh infections as on Thursday, looks all set to overtake Delhi on Friday, and become the state with the sixth highest caseload in the country. 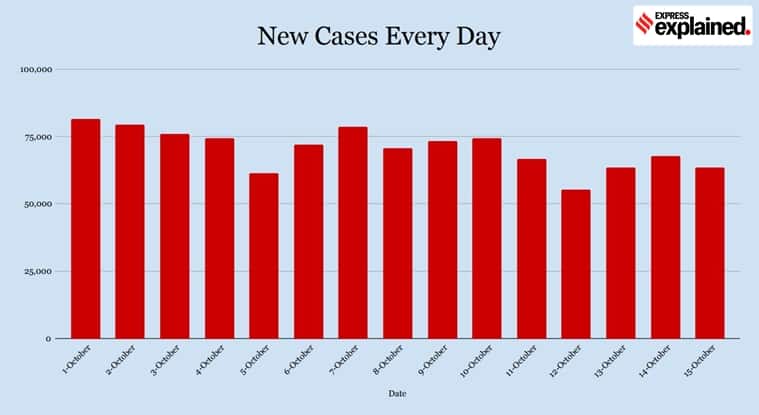 A little more than 63,000 new cases were discovered on Thursday, about 4,000 less than the previous day. So far, more than 73.7 lakh people have been infected with the virus in the country, out of which over 64.5 lakh, or about 88 per cent, have recovered from the disease. On Thursday, over 70,000 people were declared to have recovered, making it the 13th day in succession that the recoveries have exceeded new cases.

Almost 900 coronavirus-related deaths were reported on Thursday, indicating that the abnormally low tally of 680 deaths on Wednesday was most likely an aberration. The total death count now exceeds 1.12 lakh.