On Wednesday, Indian-origin spinner Tanveer Sangha was included in the Australia squad for the T20I series in New Zealand next month, on the back of a prolific maiden Big Bash season

Playing for the Sydney Thunder, the 19-year-old has emerged as the third-highest wicket-taker, with 21 dismissals at the end of the group stage, at 16.66 runs each and an economy of 8.04 runs per over — leaving behind established leggies such as T20 stalwart Rashid Khan and compatriot Adam Zampa. The batsmen left foxed include Australia limited-overs captain Aaron Finch and Peter Handscomb and Chris Lynn.

The national call-up comes as vindication for father Joga. He migrated to Sydney’s south-west suburbs from Rahimpur Kala Sanghian, a village 20 km from Jalandhar, in 1997. Joga worked on a farm in Brisbane before becoming a taxi driver in Sydney.

“I never watched cricket in India. I played kabaddi, volleyball and wrestling. Here, we have those tournaments (wrestling) in winters and Tanveer would often accompany me and play in the junior bouts,” Joga tells tian Express. “When he was ten years old, we got him enrolled in the Ingleburn RSL Club to play cricket. I picked up and dropped Tanveer from our home in Ingleburn to the club and that meant I had to skip some of my taxi rides and work early morning or late at night.”

Sangha responded by putting in the work. And when not letting it rip on the pitch, the youngster would devour YouTube compilations of Shane Warne and — more recently — India star Yuzvendra Chahal.

In the Big Bash, Sangha has been used in the Powerplays and at the death. To curb the run rate against a red-hot Glenn Maxwell and to deliver breakthroughs. Fans have labelled him “the true heir to Nathan Lyon” and Thunder coach Shane Bond has used the adjective “outstanding”.

Signed by Thunder as a development rookie in 2018, Sangha had become the third-youngest BBL recruit the following year. He finished last year’s Under-19 World Cup in South Africa as Australia’s most successful bowler. Last month, he took a wicket off the third delivery on his BBL debut.

Those in the know aren’t surprised. Anthony Clark, the development coach at Cricket New South Wales, who has been working with Sangha since his Under-16 days, tells The Indian Express, “It’s the desire to learn and listen. Even now, there will be a message after the game, asking a question… He is a lot more mature than what his age says. He wants big challenges, bigger occasions… just the amount of bowling he does… We get players to log how many balls they bowl and his number is so much higher than any other bowler in the country.”

Growing up, like father Joga, Sangha Jr wasn’t consumed by cricket either. Between volleyball sessions at the local Gurudwara, falling for cricket happened gradually, over the summer vacations spent at his ancestral village. Soon, Sangha would bring tricks learnt in the Rahimpur fields to Campbelltown parks, and later to his school ground.

Despite boasting of the Waugh brothers and five-time Olympic gold medallist swimmer Ian Thorpe as alumni, the East Hills Boys High School is not a “sports school”. And that worked perfectly for Sangha.

“A lot of people told me to go to a sports school,” Sangha told The Sydney Morning Herald last month. “I had friends that went to a sports school and had training after school, training before school and during school. For me, it wasn’t cricket, cricket, cricket all the time. I 100 per cent loved going to a normal public school. I could just chill out and then I could focus on cricket.”

Byron Hackshall, Sangha’s high school coach and PA teacher, remembers Tuesday afternoons futilely deliberating over which sport to play. “Rather than trying something different, he just wanted to play cricket,” Hackshall laughs. “Very vocal and energetic in the field, he is an outstanding role model for our school.”

Last season, the sheer amount of bowling he does left Sangha with back issues. “He slowed down and worked on specific drills. When he was finally cleared for the national Under-19 tournament last year, he was like a kid on Christmas Eve. He got crucial wickets, scored some runs and helped us win the final,” says Clarke.

Last year Sangha also got a chance to mingle with the New South Wales heroes. When not sending down over after over to Steve Smith, Sangha picked the brains of off-spinner Nathan Lyon on how to set up dismissals. But it was all-rounder Moises Henriques who truly took him under his wing. 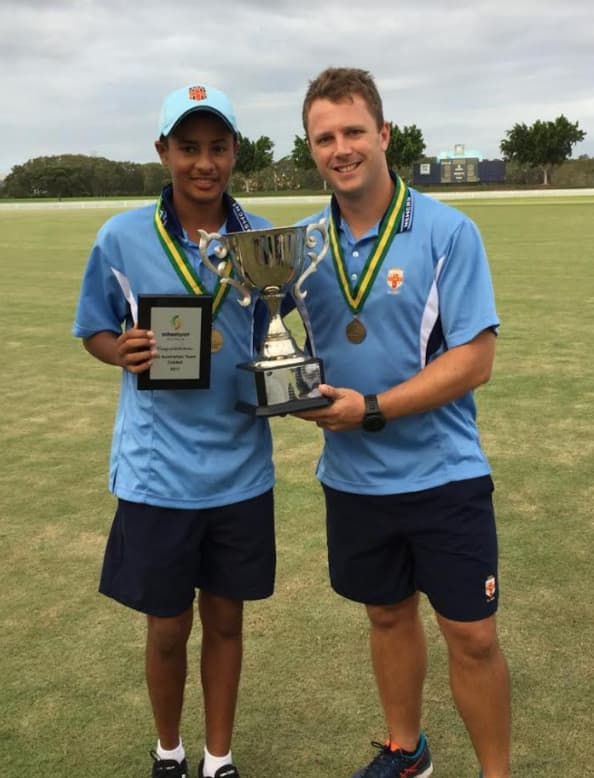 “They were bowling and batting against each other and Moises kept an eye on his game. ‘That was nice, why aren’t you doing that more?’ Few other guys in the Blues group also kept talking to him,” says Clark, adding that the Covid restrictions helped, by keeping training groups small. “It made it much better for the younger players because conversations with senior players were more consistent.”

Sangha has emerged as a find at a time when Australia is looking for spinners, especially with no clear successor to 33-year-old Lyon. In Sheffield Shield 2019-20, the top 20 wicket-takers were all pacers; 21st was Steve O’Keefe, the 36-year-old left-arm orthodox.

“With our fast bowlers we’ve got a long list… doing well. But with spin, we’ve got Nathan and that’s it. What are we doing to help the kids develop?” O’Keefe told Wide World of Sports at the time.

While comparisons with past leg-spinning greats have followed, these are not just wildly premature but also extraneous. “I wouldn’t liken Sangha to any of those great bowlers from a technical point of view. He is a more subcontinental sort of leg-spinner,” says Clark. “And although he’s doing really well in T20, he has a lot of layers. The consistency and variations, as well as the ability to change the flight, is something not a lot of young players have. He has got players out with balls out of the front of his hand, with a nice wrong ’un.”

Hackshall says “it’s a generational thing”, with Sangha coming into professional cricket through the T20s. “There’s a high price put on being able to bowl six different balls. In Test or Shield cricket, it’s about trying to build pressure, ball after ball in the same spot,” says Hackshall. “I don’t think we’ve seen the best yet. The more longer-format cricket Tanveer plays, the better his control will get.”

Joga meanwhile is looking back and dreaming ahead.

“Tanveer accompanied me and my friends to watch India play Australia in a T20 match at SCG in 2018 and later said that one day, we will be watching him play in Australian colours from the same spot,” says Joga. “We know it’s too early to say but to watch him play in the T20 World Cup in India this year at the stadium or TV will be a dream come true for him.”