Farmers’ Protest Live Updates: Groups of protesting farmers on Tuesday entered Red Fort after breaching police barricades, attacking personnel and even vandalising a bus at ITO. Meanwhile, one person was killed at protests in ITO after his tractor was shot at.

The chaos unfolded despite the police giving farmers camping at Delhi’s three borders — Singhu, Tikri, and Ghazipur — permission to hold rallies on specific routes, only after the official Republic Day parade at Rajpath. As per the agreement, farmers were to remain in the adjoining areas of the borders and not venture towards Central Delhi. At Singhu, amid the chaos, the police resorted to lathicharge and tear gas to control the protesters.

The tractors rally will mark the completion of two months of protest against the Centre’s contentious farm laws by farmers camping at the borders of Delhi. Farmer leaders also announced a plan to march on foot to Parliament on February 1, the day the Union Budget will be presented.

Meanwhile, senior farmer Balbir Singh Rajewal said farmers were following the pre-decided route. No one from the Sankyukt Kisan Morcha went to the Outer Ring Road. “We condemn violence against farmers, appeal to all to maintain peace,” Rajewal told PTI.

Red Fort is fully occupied by protestors now and tractors are also present outside. While few cops are sitting on chairs, others are trying to bring down certain flags which the protestors hoisted (Sofi Ahsan reports)

Traffic affected in parts of Delhi due to farmers’ tractor rally

Violence is not the solution to any problem: Rahul Gandhi

Underlining that violence is not the solution to any problem, Congress leader Rahul Gandhi appealed to the Centre to repeal the farm laws 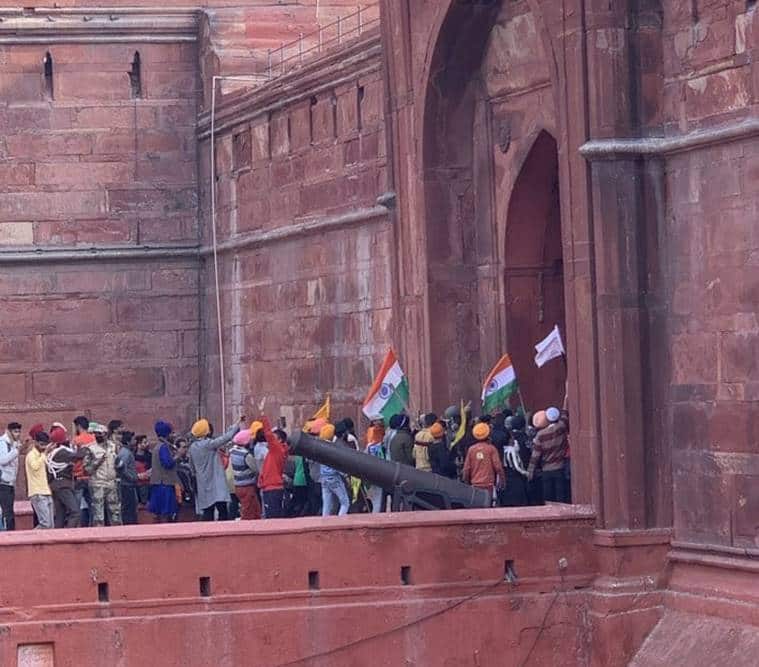 One person killed at protests in ITO

One person was killed at protests in ITO on Tuesday. His tractor turned turtle after being shot at.

“There are some youngsters that have reached ITO and Red Fort area. They are farmers like us from Punjab and Haryana. Our effort is to maintain peace and there are several tractors at the borders itself right now. We are trying to speak to them and ensure that people are on the assigned route” Ruldu Singh Mansa, Punjab Kisan Union told the Indian Express (Amil Bhatnagar reports)

Farmers’ tractor rally: Quick recap of how things unfolded during the day

In case you are just joining us, here’s a quick recap of all that has happened till now 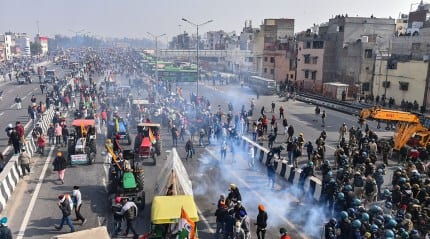 The Delhi Police had given permission to farmers protesting the three farm laws to hold their tractor parade on selected routes only after the official Republic Day parade on the Rajpath concludes. However chaos ensued as the farmers were were adamant of heading towards central Delhi.

A clash broke out between police and protesting farmers after the latter reached ITO in the national capital and tried to move towards Lutyen’s Delhi, prompting the force to use lathicharge and tear gas shells against them. The protesters were seen chasing police personnel with sticks. The police men also resorted to lathicharge and fired teargas shells to disperse the crowd. (Jignasa Sinha reports) Groups of protesting farmers broke police barricades to force their way into the national capital and reached Central Delhi on Tuesday. The farmers broke barricades, attacked police personnel, and vandalised a police bus at ITO.

The Delhi Police Tuesday resorted to lathicharge and tear gas at the Singhu border after protesting farmers breached barricades set up to thwart them from entering the national capital. The police had given farmers permission to enter the city after the official Republic Day parade at Rajpath.

Since tractors for the tractor rally are stuck at the Tikri border, several farmers have parked themselves on the road.

In Sonipat, on the other hand, the situation remained peaceful with the youth singing revolutionary songs on their tractors and jeeps. The heavy traffic jam along the route to Delhi has prevented the farmers from moving ahead. They have switched off their tractors and other vehicles for the time being. (Sukhbir Siwach reports) 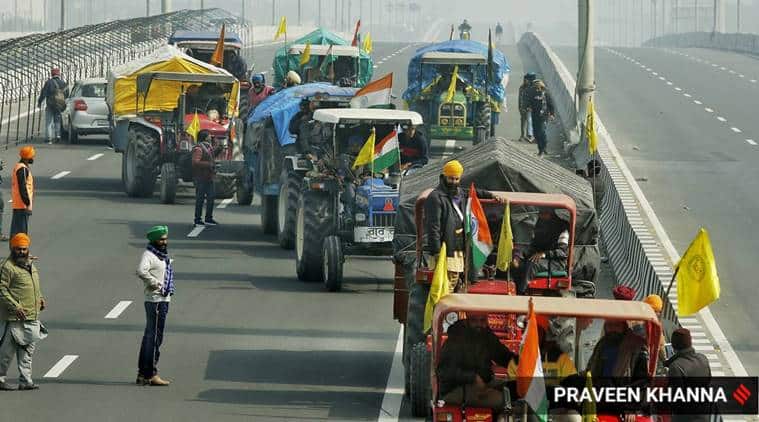 Tractors at Ghazipur border for the farmers’ Republic Day march, in New Delhi on Saturday. (Express photo by Praveen Khanna)

The Haryana Police said there would be disruptions in vehicular movement on the national highway from Karnal and Rohtak towards Delhi from Jan 25-27.

“Traffic on KMP-KGP expressway will also be impacted and interchanges at Kundli, Assaudha and Badli will not be accessible to traffic movement on these dates,” a police advisory said. “Therefore, all commuters are being advised not to use these routes on these dates to avoid any inconvenience,” it added

Farmer leaders had earlier said a group of 500 tractors-trolleys left Amritsar and several others batches from Phagwara, Hoshiarpur and other places of Punjab also moved towards the national capital to take part in the tractor parade.

They also appealed to those participating in the Republic Day tractor march to carry enough ration for 24 hours and ensure that the rally remains peaceful.

'It's not simply about going back to domestic': Bishop on how Shaw can return