Meanwhile, tension brewed at Delhi-UP border at Ghazipur on Thursday after Ghaziabad administration issued orders to the farmers to vacate the protest site by tonight. While the administration said it is prepared to vacate the border, the farmers refused to give in with Bharat Kisan Union spokesperson Rakesh Tikait announcing that he is ready to die. He also claimed that the electricity and water supply have been cut at the site. “We will not move from here. We will commit suicide but won’t end protest until the farm bills are repealed,” he said. As hundreds of police personnel in anti-riot gear, and Rapid Action Forces spread out across the area, securing the peripheries, the protesting farmers moved closer to the stage, from where Tikait regularly spoke.

Uttar Pradesh government ordered all its DMs and SSPs to ensure the end of all farmers’ protests in the state, reported ANI.

Around 70-100 locals from Bakhtawarpur and Hamidpur have assembled at Singhu border to protest against the farmers camping there on Thursday. They are carrying banners and placards condemning the violence by the farmers on Republic Day. Meanwhile, Delhi Police has issued lookout notice against farmer leaders who have been named in the FIRs filed in connection with the violence that broke out during the farmers’ tractor parade in the city on January 26, police chief S N Shrivastava said. The farmers will also be asked to surrender their passports. The police have named 37 farmer leaders, including Rakesh Tikait, Yogendra Yadav and Medha Patkar, in the FIR that mentioned charges of attempt to murder, rioting and criminal conspiracy.

Leaders of 16 Opposition parties Thursday released a joint statement saying they would boycott the President’s address to Parliament on January 29, ahead of the commencement of the Budget session. The leaders reaffirmed their collective demand for the repeal of the three farm laws and said they stood in solidarity with protesting farmers. The Opposition leaders, from parties including the Congress, NCP, DMK, TMC, Shiv Sena p, Samajwadi Party, RJD, CPI, CPI(M) and PDP, said the legislations were “an assault on the rights of the States and violate the federal spirit of the Constitution”. They said the laws were “brought without any consultations”, “lacked national consensus”, and “parliamentary scrutiny was bypassed… muzzling the Opposition”.

Will not be intimidated by Delhi Police notices, govt trying to end movement: Samyukta Kisan Morcha

The Samyukta Kisan Morcha on Thursday said it will not be intimidated by the notices sent to its leaders by Delhi Police and alleged that the government is trying to put an end to the farmers’ movement against agri laws by blaming it for the violence during the January 26 tractor rally. The Samyukta Kisan Morcha is an umbrella body of farmer unions protesting against the Centre’s three farm laws at various border points of Delhi. In a statement, the morcha said, “We will not be intimidated by the notices being sent by the Delhi Police and will respond to the same. The BJP government (at the Centre), along with its state governments, is trying its best to put an end to this movement by blaming SKM for the events of 26th January and this is not acceptable. The police are doing their best to evacuate several dharnas.” –PTI

Punjab Chief Minister Amarinder Singh on Thursday said the Delhi Police issuing lookout notices against farmer leaders over the tractor rally violence is “absolutely wrong”. He also said treating the farmers as “flight risk” was not only “illogical but condemnable”. “Where will they flee?” asked the chief minister, adding that most of them are small farmers with small land holdings and not some “big corporate raiders” who had fled over the past few years after “looting” the country of billions of rupees. “You failed to stop these bigwigs but are now targeting these small farmers fighting for their survival,” he said and appealed to the Centre to immediately direct the Delhi Police to withdraw the lookout notices. –PTI 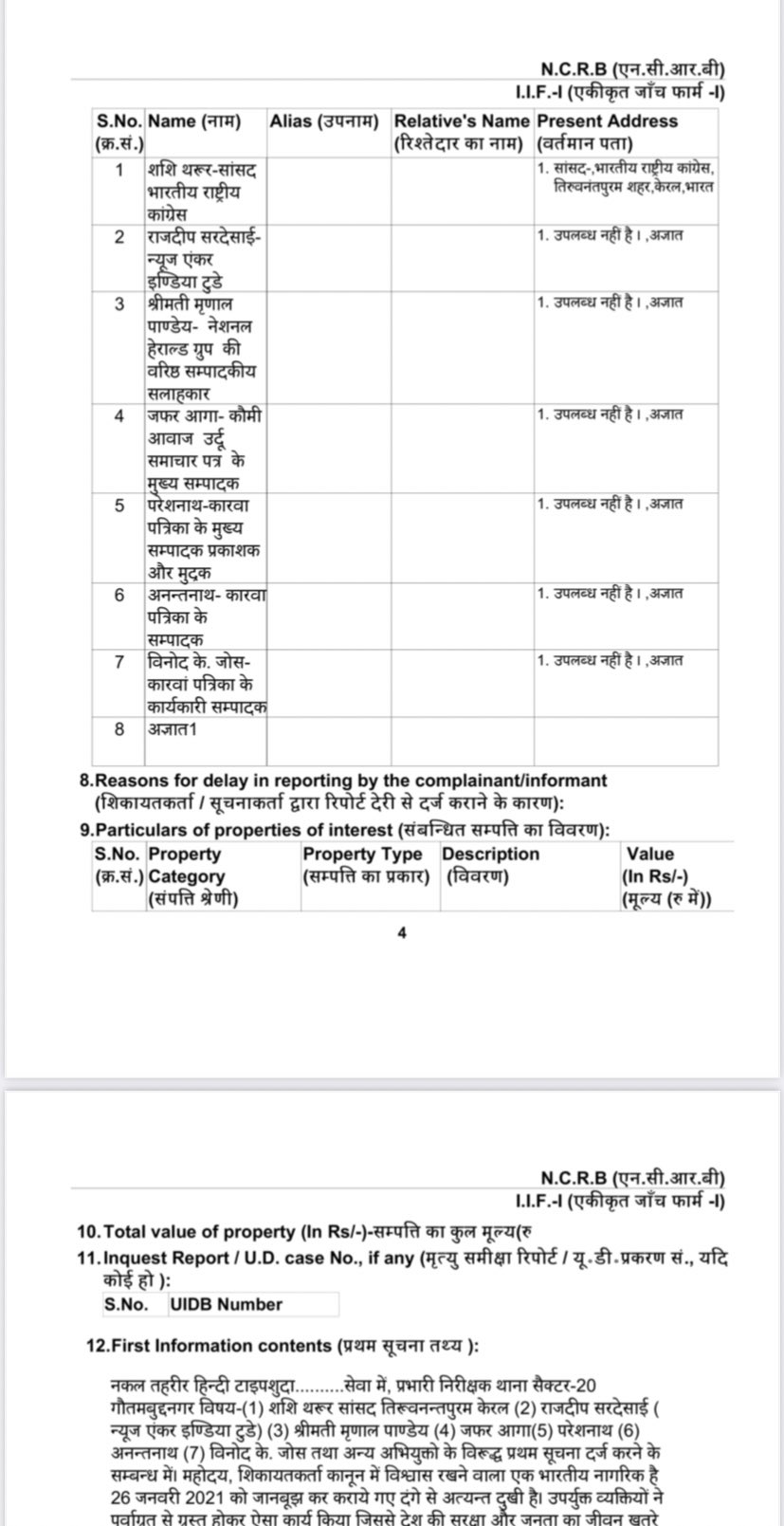 Contrary to every rule of democracy: Priyanka Gandhi on attempts to break farmers’ movement

UP AICC in-charge Priyanka Gandhi Thursday said the attempt to break or end farmers’ movement is contrary to every rule of democracy. She sought strict action against violent elements but at the same time said that the whole country stands with the protesting farmers.

With farmers in this struggle: Chandrashekhar Azad

Bhim Army Chief Chandrashekhar Azad on Thursday extended support to farmers’ protest and said because of this government, the Dalits and the farmers have formed a relationship of pain. “The government has crossed all limits of atrocities on the farmers. Dalits have also faced this government repeatedly. We can understand the pain of farmers. We have formed a relationship of pain. We will fight together against this persecution. My party and I are with the farmers in this struggle,” he said.

A section of farmers packing up to leave Ghazipur protest site

A section of farmers at Ghazipur packing up to leave the protest site on Thursday. 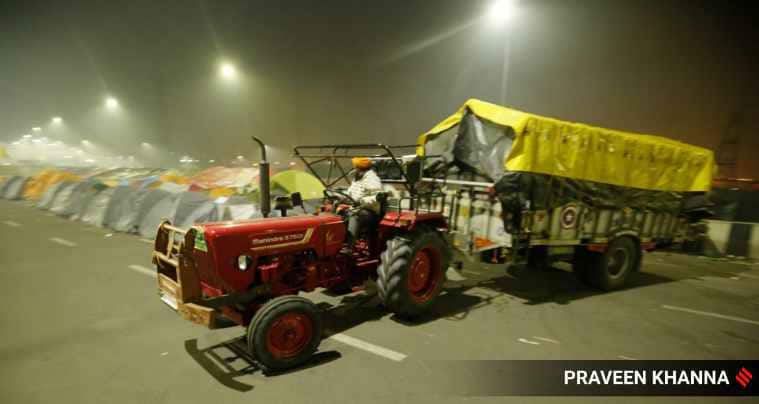 Route leading Ghazipur, UP Gate, closed on both sides

Route leading Ghazipur, UP Gate, closed on both sides.

Some farmers station themselves near stage at Ghazipur protest site

Some farmers station themselves near the stage at Ghazipur protest site.

The CPI(M) accused the government on Thursday of ‘orchestrating violence’ to disrupt peaceful protests against its policies and highlighted how a similar methodology was used during the protests at JNU and against the CAA at the Jamia Milia University and Shaheen Bagh.

Addressing a press conference, Communist Party of India (Marxist) general secretary Sitaram Yechury said what happened in Delhi on January 26 was ‘straight out of the playbook’ of the BJP’s tactics. ‘That is distraction, destruction and disinformation. It is on the basis of this that they have orchestrated the violence. They now want to use this to distract people from the main issue,’ he said.

Yechury also raised a slew of questions on the events that led to farmers climbing the ramparts of the Red Fort on Republic Day. ‘Lakhs of farmers were proceeding through the pre-decided routes. One splinter element was allowed to deviate from the group.

‘How did they deviate without police connivance? How did they reach ITO? They were even allowed to reach the Red Fort and climb up to the ramparts. Anyone who is familiar with the security at Red Fort knows that it is impossible to reach the ramparts without the gates being opened. These gates are usually under lock and key. Who opened the gates and who allowed them to climb the ramparts? This smacks of very clear connivance,’ he said. (PTI)

Delhi Police’s Special Cell will investigate the “conspiracy” and “criminal designs” behind the violence during the farmers’ tractor parade on January 26, officials said on Thursday. The Delhi Police claimed that there was a “pre-conceived” and “well coordinated” plan to break the agreement arrived at with farmer leaders to bring international embarrassment for the government on Republic Day. “The Special Cell is investigating the conspiracy and criminal designs behind these unfortunate events of January 26. –PTI

Around 30 farmers from DDA ground, Burari, have moved towards Singhu border and 15 others have been detained for their possible involvement in Republic Day violence. Burari ground is being cleared.

“We’ll continue our sit-in protest & will not vacate site till talks with government are held. Administration has removed basic facilities including water & electricity supply. We’ll get water from our villages,” said Bharatiya Kisan Union spokesperson Rakesh Tikait at Ghazipur border.

Decision to boycott Prez’s address to Parliament most unfortunate, reconsider it: Union minister to Oppn

Uttar Pradesh government has ordered all DMs and SSPs to ensure the end of all the farmers’ agitations in the state, reported ANI.

Huge police force and Rapid Action Force also called in at the site. Power and water supply have also been cut at Ghazipur, allege farmer leaders

Tension brewed at Delhi-UP border at Ghazipur on Thursday after Ghaziabad administration issued orders to the farmers to vacate the protest site by tonight. While, the administration said it is prepared to vacate the border, the farmers have refused to give in with Bharat Kisan Union President Rakesh Tikait announcing that he is ready to face bullets.

The Delhi Police Crime Branch will probe the cases of violence at the Red Fort, ITO and seven other places during the farmers’ tractor rally on Republic Day. The police have so far registered 33 FIRs in connection with the violence that left 394 cops injured and one protester dead on January 26.