Asserting that the new farm laws were passed after extensive deliberations in Parliament, the BJP said in the Rajya Sabha on Wednesday that the government’s doors were always open for farmers to resolve the issue amicably, and urged Opposition parties not to turn the agitation into another Shaheen Bagh.

Initiating the debate on the Motion of Thanks to the President’s address, BJP member Bhubaneswar Kalita said, “The benefits of these three important farm laws have started reaching more than 10 crore people and small farmers. There has been no reduction in the rights and facilities of farmers. Through these agriculture reforms, the government has given new rights to farmers.”

Saying the government has “utmost respect for farmers” and that Agriculture Minister Narendra Tomar and Railways Minister Piyush Goyal have held multiple rounds of discussions to resolve the issue, Kalita said, addressing the Opposition, “The government is ready to discuss all issues… but my appeal to our friends, please do not make it another Shaheen Bagh,” he said. 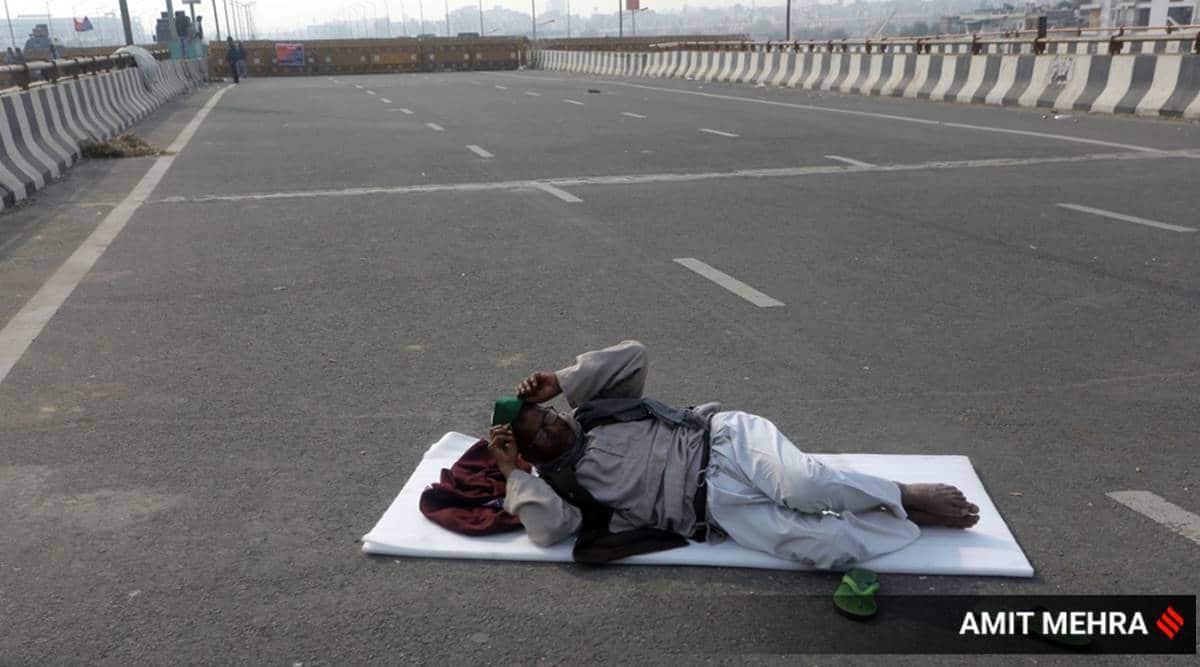 A farmer protesting against the new farm laws.

Rajya Sabha Chairman Naidu had on Tuesday said that members can raise the farmers’ issue during the debate on the motion as the President had mentioned the agitation in his speech.

In his intervention, Leader of Opposition and Congress leader Ghulam Nabi Azad, while condemning the violence at Red Fort during the farmers’ tractor rally on Republic Day, asked the government to withdraw the three laws without making it a prestige issue.

With Narendra Modi watching, Azad said the Prime Minister himself should make an announcement on the repeal of the laws. “I urge the government to withdraw these three bills,” he said, and added that the government should set up a committee to find out the whereabouts of people “who have gone missing” during the farmers’ protest.

Also Read |Protests on agri laws pick up in Rajasthan, across caste, religion

Referring to the violence that broke out in Delhi during the farmers’ tractor rally on January 26, the Congress leader said the entire Opposition condemns the incident. “Disrespect to the national flag cannot be tolerated,” he said, demanding strict action against the culprits.

Describing farmers as “annadata”, the Congress leader said there was no point confronting them. Instead, he said, the government should focus on other important issues, including revival of the economy.

Azad also demanded the withdrawal of sedition cases against his party colleague Shashi Tharoor and mediapersons, saying, “Shashi Tharoor was minister of state for external affairs. He has represented the country outside. How can he be anti-national…then we all are anti-nationals.”

The Opposition members moved 118 amendments to the Motion of Thanks to the President’s address.

Calling the violence of January 26 condemnable and seeking an inquiry by a sitting judge of the Supreme Court, Prasanna Acharya of the BJD, a party that has in the past gone with the government on crucial issues such as scrapping of Article 370, however, said he did not see any reason why the government could not include “two lines” guaranteeing MSPs in the farm laws.

Tiruchi Siva of the DMK and K Keshava Rao of the TRS raised the manner in which the farm laws were allegedly rushed through in the Rajya Sabha during the last session. “If only we were to be a little more democratic, a little more liberal, things would not have come to this pass,” Siva said, calling for a repeal of the laws.

The SP’s Ram Gopal Yadav called the government “merciless” even as “farmers are losing their lives in the cold”. Saying Parliament or even the country’s borders don’t have the kind of security witnessed at Delhi’s borders, Yadav asked the government to repeal the laws, bring new Bills and send them to a Standing Committee for scrutiny. “If you had done this before, then none of this would have happened,” Yadav said.

The laws, however, got strong backing from the JD(U)’s RCP Singh, who said that after APMCs were done away with in Bihar in 2006, production and procurement of crops have gone up.

The debate on the Motion of Thanks will continue in the Rajya Sabha on Thursday.

Earlier, three Aam Aadmi Party (AAP) MPs, including Sanjay Singh, were on Wednesday marshalled out of Rajya Sabha after they disrupted proceedings over the farm laws.

While the Upper House was adjourned only once, briefly, Lok Sabha witnessed repeated adjournments with the Opposition insisting on a separate discussion on the farmers’ protests.

Speaker Om Birla’s attempt to resolve the matter through a discussion with floor leaders did not yield results as he refused to allot five hours to discuss the farmers’ issue.

When the house met at 4 pm, Congress MPs trooped to the well of the house shouting slogans and were soon joined by members of the DMK, TMC, Left, AAP and SAD’s Harsimrat Kaur.

Despite the Speaker asking the Opposition to let Question Hour function, the members intensified their protests, forcing Birla to adjourn the proceedings for 30 minutes.

The House met at 4.30, but had to be adjourned again. As the protests continued after the House met again at 5 pm, Parliamentary Affairs Minister Pralhad Joshi hit out at the Opposition for its “U-turn on its promise of holding a debate on the Motion of T

New coronavirus vaccine puzzle: who should get which shot?