Raj’s guitar-strumming come-ons and his palat-palat shtick, the dreamy-eyed Simran’s Euro fantasy, Bauji’s commitment to Indian values, the NRI culture, Punjab’s pop yellow mustard fields and plenty of pigeon-feeding and mehndi-inflected ballads (thanks to melody kings Jatin-Lalit) — these oft-parodied images and characters belong to the fan-favourite Dilwale Dulhania Le Jayenge. For adherents, it’s not just any ordinary movie. It’s a friend. They prefer to call it simply DDLJ, which is either an acronym, nickname or a term of endearment. The longest-running film in the history of Hindi cinema turns 25 today, but how well does the iconic blockbuster hold up in the post-me too, post-feminist, post-liberal, post-introspection and god knows how many ‘posts’ later? Has its cultural influence endured or dimmed?

Starring Shah Rukh Khan as the outrageous flirt Raj, Kajol as family girl Simran, the late Amrish Puri as the strict patriarch Baldev Singh, Farida Jalal as Simran’s supportive mother and Anupam Kher as Raj’s equally flamboyant single dad, DDLJ was a game-changer when it first opened to packed houses in 1995, in a newly liberalised India. Its release coinciding with the heady days prompted by economic reforms. Soon, this would drive the country towards a new, more consumerist and globalised social reality. Multiplexes were still some years away, but the dress circles, balconies and stalls of single screens (it still plays to a rapt audience in Mumbai’s fabled Maratha Mandir) were teeming with couples and families angling to get a dekko at this aspirational love story. For the middle-class viewers whose idea for a vacation was Kullu Manali family package, DDLJ’s European landmarks served as a vicarious pleasure and wish fulfilment. Another quiet cultural shift was brewing in here: Karan Johar, who has a blink-and-miss cameo as SRK’s friend in the movie, learnt one end of his filmmaking rope from DDLJ (the other came from Yash Chopra’s earlier romances). So, DDLJ provided the blueprint for much of the slick Dharma fluff you saw through the late 1990s onwards. 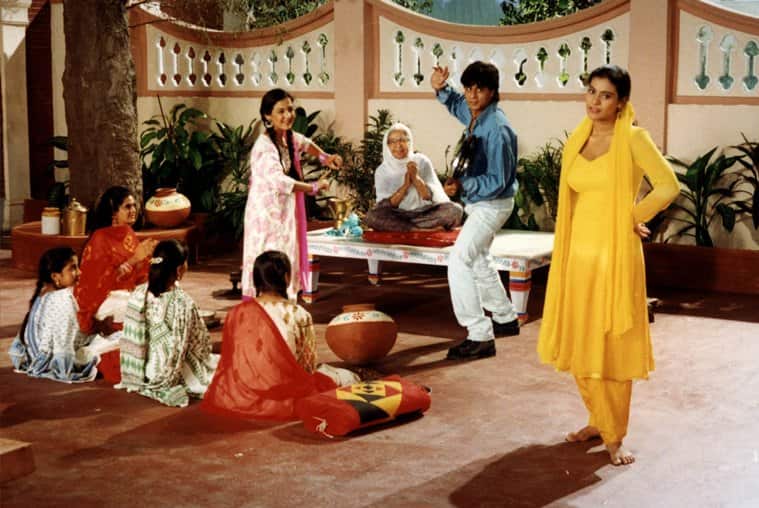 The screen pairing of Kajol and Shah Rukh Khan had previously struck gold in Baazigar (1993) and Karan Arjun (1995), but it is their turn in DDLJ that made an outsized cultural imprint. (Express archive photo)

First things first. The film was an expensive launchpad for Yash Chopra’s son and heir to his growing celluloid empire, Aditya Chopra, and was shot in exotic locales of London, Switzerland and Punjab by YRF veteran Manmohan Singh — not to be confused with the father of economic liberalisation. Aditya, who’s married to Rani Mukerji, is a Bollywood enigma. Despite a landmark debut, writes Anupama Chopra, “Aditya Chopra became a name, but not a face.” Sensationally popular, the screen pairing of Kajol and Shah Rukh Khan had previously struck gold in Baazigar (1993) and Karan Arjun (1995), but it is their turn in DDLJ that made an outsized cultural imprint. Their glamorous and whirlwind romance as Raj-Simran helped redefine the idea of love and courtship for young and West-worshipping audiences. On the other hand, the film also “ruined” romance for many. But we will come to that later. Baldev Singh (Amrish Puri), or Bauji as he is called, is a moderately successful NRI living in London with his family, including daughter Simran (Kajol) and wife Lajjo (Farida Jalal) but his heart still pines for India. In walks Raj (Khan), a London rich kid. Bauji is touchy about India and his first impression of Raj is that this guy’s probably giving the honest and hardworking NRI a bad name. Raj is brash and a shameless lover who will do anything to woo an initially reluctant Simran. But once the couple is madly in love, convincing Bauji for marriage is next to impossible. Instead, Bauji has fixed her nuptials with a friend’s son, which marks their return to India. From Euro Rail to Indian train, the action shifts to the picturesque wintery Punjab, Bauji’s homeland.

Every Hindi front-bencher knows what will follow. Khan’s Raj goes all out to win over her family, which in the ’90s became a very cool thing. The formula being quickly emulated by all relentless suitors and creeps. In the film’s edge-of-the-seat climax (so famous that Shubh Mangal Zyada Saavdhan recreated it to generate some laughs as well as make a point about homophobia), an unbending Bauji finally lets go of Simran’s hand with these oft-quoted closing lines, “Jaa, Simran, jaa, jeele apni zindagi (Go, Simran, live your life).” On the departing train is a badly bruised Raj, who stretches his hand to sneak her in. Happy ending?

Once you look past the patriarchy, DDLJ embodies ‘Bollywood dream’ at its finest. (Express archive photo)

Not exactly, because in the last decade, critics and DDLJ-bashers have torn into the movie’s oppressive patriarchy, something that the ’90s audiences had overlooked in their early excitement or perhaps people woke up to the sticky patches only much later. In 2014, on the occasion of the movie’s 20th anniversary, senior journalist Sidharth Bhatia had pointed out, “The inherent conformism of DDLJ and much else that came after is troubling. It is only when Amrish Puri gives ‘permission’ that Simran runs to her boyfriend.” Others still took issue with the film’s female characters and gender roles. Like this polemic in Feminism in India, in which writer Sanjula Gupta argued, “The submissive female protagonists are often passive objects in Dilwale Dulhania Le Jayenge and it is the male characters who determine their fate.”

25 years on, what precisely is DDLJ’s legacy? Sure enough, it is one of Hindi cinema’s greatest money-spinners and a huge cultural touchstone. As usually befitting era-defining debuts, reclusive director Aditya Chopra has never been able to match its success in the decades that followed. Even Shah Rukh Khan, celluloid’s Romeo extraordinaire, has tried to replay Raj a number of times in his career after DDLJ but has seldom found that midas touch — now, 50 plus, the lover boy days may be far too behind for King Khan.

Perhaps, the ‘stalker’ bit that worked early on in his career (Darr, Anjaam, even DDLJ) may not feel so welcome in contemporary times. Worse, in the much wizened 2020, it will run him into trouble. Kajol, one of the film’s principals, is still prominently around. Although she makes infrequent appearances on the big screen, back in the ’90s, she was the stuff dreams were made of. Evergreen Amrish Puri, arguably the most reliable ingredient in any Hindi film, is sadly no more to see the different reactions (both good and bad) to DDLJ, especially his own contribution to some of the “conformism” that critics are finding fault with.

Also Read | DDLJ stars: Where are they now?| DDLJ at 25: Celebs and fans celebrate milestone | Did you know these 10 things about Dilwale Dulhania Le Jayenge?

DDLJ smashed the domestic box-office, but it has an equally large viewership in the West, particularly among diaspora who foolishly view it as the most quintessentially Indian film (or export) ever. Some even travel all the way to India on a bride-hunting expedition, hoping to find the Simrans of their dream. At least R Madhavan opts for that route in Tanu Weds Manu. DDLJ’s popularity abroad could be because it reminds them of home and a more innocent time they have left behind. Even Barack Obama’s idea of India, it seems, comes from DDLJ. Anyone recalls the former US Prez mouthing SRK’s “Bade bade deshon mein aisi chhoti chhoti baatein hoti rehti hai, Senorita” at a public event, to raucous applause? Meanwhile, in India, once you look past the patriarchy, DDLJ embodies ‘Bollywood dream’ at its finest. One should wait and watch to see if it will go the Gone With The Wind way, as in consecutive generations will rediscover the film and dig out more problems and try to remake it in their own image. How about renewing this conversation on the film’s 35th anniversary? Till then, let’s cut Raj and Simran some slack and allow them their share of domestic bliss.