As the counting of votes in Bihar continued through the day on Tuesday, the close nature of the battle became increasingly obvious. The fact that the NDA managed a narrow victory became the clear headline. Yet, the verdict of the Bihar voter has multiple small stories that add up to the big picture. In this article, we hope to unpack these multiple strands.

Nitish Kumar was able to overcome the inevitable fatigue of being in power for a decade. This was partly on account of the Mahagatbandhan (MGB) not being seen as a viable option, and partly due to the positive sentiment associated with the performance of the central government. The caste calculus continued to offer important insights while the youth vote got divided on gender lines.

The Lokniti-CSDS Post poll, on which this analysis is based, got the vote shares of the two major alliances reasonably close. We projected a vote share of 39% for the MGB and 36% for the NDA with an error margin of +/-3%. Eventually, the NDA got 37.3% and the MGB 37.2%. All numbers reported here have been weighted by the final outcome.

The post-poll survey indicates a substantive last-minute swing in favour of the NDA. This was a vital factor in explaining the direction of the final verdict. One of every four respondents said they decided their vote only on the day of voting. Close to half of them voted for an NDA candidate. This trend was stronger in the last phase of voting, when more than two-thirds of those who decided on the day of voting, chose NDA candidates (Chart 1).

Phase 1 saw the most last-minute decision-making

Among the one-third who decided their choice either after the declaration of the candidates or the start of the campaign, it was the MGB that did better. This implies two clear trends. The whirlwind campaign by Tejashwi Yadav (247 rallies in 20 days) helped the MGB put up a stiff fight against the NDA. The Lokniti-CSDS pre-poll survey in October had found the MGB trailing the NDA by quite a distance. Secondly, Prime Minister Narendra Modi’s rallies also seem to have made a difference in galvanising NDA voters, particularly in phase 3, thus taking the alliance past the majority mark.

Also read | Despite crowds, an absence: Why Tejashwi’s Caste-Plus remained his work in progress

It is clear that many BJP traditional voters stayed away from the NDA in JD(U)-contested seats, and this election may not have ended up being so close but for the LJP damaging the prospects of the JD(U). The survey indicates that in BJP-contested seats, three-fourths of traditional BJP supporters voted for the NDA, whereas in JD(U)-contested seats, the support shown by BJP supporters for the NDA candidate was just over 50% (Chart 2). In such seats, the LJP seems to be have swung a segment of the traditional BJP voters in its favour (around 13%), thus damaging the prospects of the JD(U) candidates. Many of these traditional BJP voters who shifted to LJP were Dusadhs and, to some extent, those from the upper castes.

Vote transfer between JDU and BJP

Interestingly, despite the MGB losing, the survey shows that vote transfer among MGB alliance partners was more or less smooth with Congress and RJD supporters voting for each other’s candidates in almost equal measure (Chart 3). 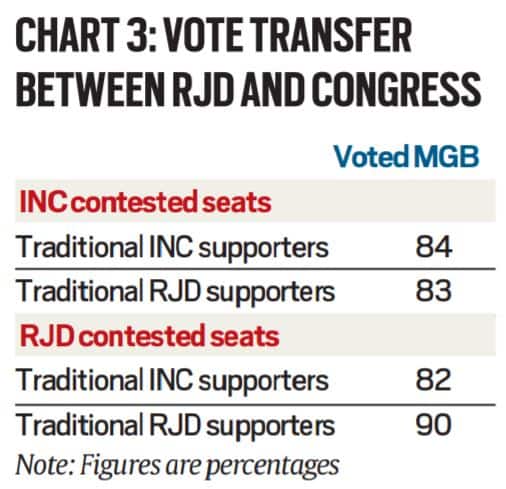 Vote transfer between RJD and Congress

The Congress not doing well, therefore, cannot be attributed to a poor transfer of votes from RJD supporters. 📣 Express Explained is now on Telegram

To the MGB’s credit, the strategy to put unemployment at the heart of its campaign did work in its favour. While more than one-third of voters (36%) identified development as the most important poll issue, one-fifth (20%) focused on lack of jobs (Chart 4). 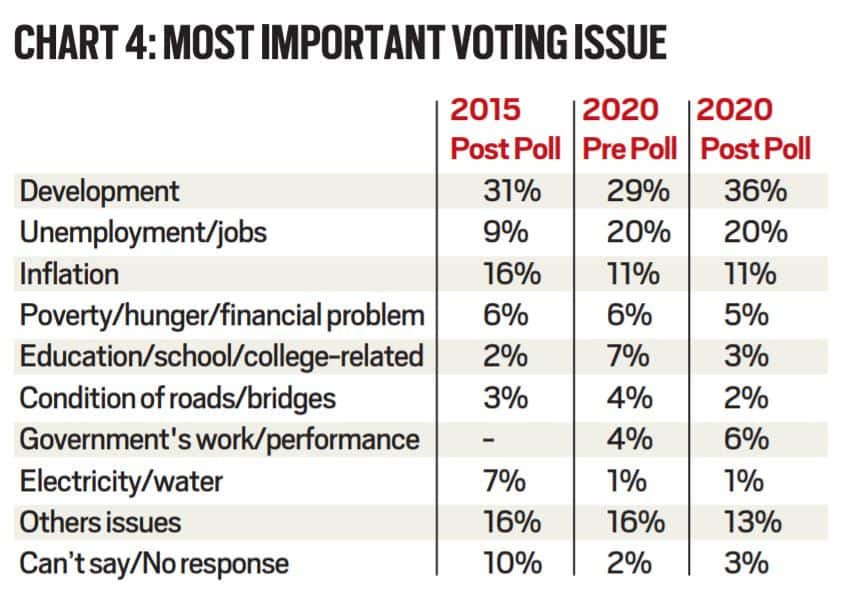 Among voters for whom the job crisis mattered the most, the MGB ended up securing over half the votes and leading the NDA by a massive margin (Chart 5). Thus, by promising 10 lakh jobs to voters, Tejashwi did sway the vote of these voters. However the attractiveness of that promise got eclipsed by the grand narrative of vikas — those voters for whom development was the key issue mostly voted for the NDA. Thus the MGB raised the right issues but was not able to convert it into results. Although joblessness was a major poll issue, particularly for the youth, it did not lead to a significant advantage for the MGB among young voters on the whole as the MGB got nearly the same proportion of votes from the 18-39 age group as the NDA (Chart 6). This happened because of a gender divide in voting preferences. The youth swing for Tejashwi was, in a sense, mostly limited to young men and not so much young women. While the RJD led among young men in the 18-39 age group, it trailed among women in the same age group by a good 5 percentage points (Chart 7). Older women voters, however, voted for the MGB more. While the gender advantage for the NDA was just two percentage points overall, we notice major differences in how women and men from certain castes and communities voted (Chart 8). Upper caste, Kurmi, Koeri and EBC women were far more likely to vote for the NDA than men from these communities. No such major difference was, however, noticed among Yadavs and Muslims with respect to the NDA, although women from the two communities were less likely than men to vote for the MGB. Given that women turned out more than men, this may have made the difference. The elections seem to have witnessed two competing consolidations — Yadavs and Muslims on the side of the MGB, and upper castes, Kurmi-Koeris and EBCs on the side of the NDA, with Dalits being the swing vote (Chart 9). Muslims and Yadavs, RJD’s traditional voters, consolidated in a major way behind the MGB, at least in the first two phases. Close to nine of every 10 Yadavs and three-fourths of Muslims voted for the MGB. However, to be able to make a bid for power, the MGB needed an MY+. The Dalit vote came to the MGB in the first two phases,and the alliance with the Communist parties was a crucial factor. In the last phase, Dalits seem to have swayed towards the NDA, according to our data. Within the Dalit community, support for the MGB was restricted to the Ravidas community and the Dusadhs. Musahars, however, mostly voted for the NDA. The NDA also got four-fifths of votes from Kurmis, the community to which Nitish belongs, and nearly three-fifths of the EBC vote.

How castes and communities voted

It may be useful to focus on the polarisation on religious lines, especially in the third phase. This is particularly true for all Hindu communities (except for Yadavs) who consolidated behind the NDA in this phase. Three-fourths of the Muslim vote in the final phase went to the RJD-led alliance but in the Seemanchal area it was the AIMIM that secured a high share of Muslim votes.

In the run-up to the campaign, a lot of attention was focused on anti-incumbency against the Nitish government. The survey indicates that there certainly was a significant degree of fatigue with the government, but no strong sentiment among voters to get rid of it. The jury was equally divided when it came to whether the JD(U)-BJP government should get another chance (Chart 10).

Divided opinion on whether Nitish government should remain

One of every 10 voters said that although the government should return, it should be without Nitish at the helm. Such voters, the survey found, eventually ended up voting for the NDA. What is also important is that the MGB was unable to consolidate the sizeable chunk (40%) of voters who wanted the government to go. Only two-thirds of them voted for the MGB. The survey also found a majority of voters quite positive in their overall assessment of the Nitish government’s performance, although these satisfaction levels were much below what was recorded in the previous elections (Chart 11). The dissatisfaction with the Nitish government was not of a sufficient high intensity to dislodge it.

Also read | Why was there a delay in counting of votes in Bihar amid Covid-19?

How critical was the manner in which people perceived the actions of the central and state governments in handling the lockdown? The survey indicates this issue may have hurt the NDA’s prospects but was not strong enough to deny it victory. Although a very small fraction of voters cited the appalling treatment of migrants during the lockdown as their most important voting issue, the survey also indicates that the NDA did far worse among migrant households than among non-migrants. Around four of every 10 households said they had a member/s living outside Bihar and among voters from such households, the NDA secured around four percentage points less votes as compared to non-migrant households (Chart 15).

The MGB appears to have got 4 percentage points more votes among migrant households than non-migrant households. In our pre-poll survey in mid-October, while we had found many voters dissatisfied with the way the state government had handled the situation, they had not been as critical of the central government — another indication that Modi’s appeal may have been at work (Charts 13 and 14).

The Bihar election was one of the closest in recent times. The community consolidation is nothing new and cannot adequately explain the competitiveness. The pandemic and consequent complications provided a unique backdrop and yet these could be neutralised by the NDA. The competitiveness emerged from an unstated distancing from Nitish, a continued confidence in Modi and a pattern of women voting more in favour of the NDA.

In every constituency, the fieldwork started a day after voting had taken place and went on for about 4-5 days except for the last phase when the survey was completed in 2 days. The interviews were conducted face-to-face at the voters’ homes using a specially designed phone application. The final data set was weighted by Census 2011 figures for age-group, gender, locality and community and the vote shares secured by the four major political fronts – the NDA, MGB, LJP and GDSF.